Liang was convicted of manslaughter last month for killing Gurley while on a vertical patrol in a stairwell at the Pink Houses in 2014. He faces up to 15 years in prison, but a statement released by Thompson says justice would best be served with a mixture of house arrest, probation and community service.

Here is the full text of Thompson’s statement:
“Peter Liang was indicted, prosecuted and subsequently convicted by a jury because his reckless actions caused an innocent man to lose his life. There is no evidence, however, that he intended to kill or injure Akai Gurley. When Mr. Liang went into that building that night, he did so as part of his job and to keep the people of Brooklyn and our city safe.

“In sentencing a defendant, the facts of the crime and the particular characteristics of that person must be considered. Mr. Liang has no prior criminal history and poses no future threat to public safety. Because his incarceration is not necessary to protect the public, and due to the unique circumstances of this case, a prison sentence is not warranted.

“Justice will be best served if Mr. Liang is sentenced to five years of probation, with the condition that he serves six months of home confinement with electric monitoring and performs 500 hours of community service. I have provided this sentencing recommendation to Justice Chun.

“As I have said before, there are no winners here. But the sentence that I have requested is just and fair under the circumstances of this case. From the beginning, this tragic case has always been about justice and not about revenge.”

Prosecutors portrayed the rookie police officer as a coward who fired his weapon into a darkened stairwell after he became startled. The bullet ricocheted off the wall and killed Gurley, an innocent, unarmed man simply taking the stairs. The defense insisted he fired by mistake and that Liang was wracked with remorse.

Following the DA’s announcement Wednesday, Police Benevolent Association president Pat Lynch released a statement, saying, “Police officers are human being and as such can make mistakes while risking their lives to protect the community. Criminalizing a mistake, even a tragic accidental discharge like this, serves no good purpose. The reasons cited by the DA for justifying no jail time in this tragedy are the very same reasons that the officer should not have been indicted in the first place.”

The shooting happened in a year of debate nationwide about police killings of black men, and activists have looked to Liang’s trial as a counterweight to cases in which grand juries have declined to indict officers, including the cases of Michael Brown in Missouri and Eric Garner in New York. Like Gurley, Brown and Garner were black and unarmed.

The verdict came after two full days of deliberations. Sentencing is scheduled for April 14. 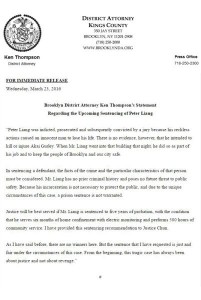